President Biden has set a goal of reaching carbon-free energy production in the United States by 2035. Even if you account for carbon neutralizing technology like carbon capture and storage, to get to carbon-free, we’ll need to eliminate a sizable share of coal and natural gas production in the country. This will require a fundamental change in the fossil fuel industry and the communities that depend on it. Although a growing number of politicians and industry experts are optimistic about the increasing number of jobs in the renewable energy sector, the workers and communities that are reliant on jobs in our current energy sector are facing a chasm between the promise of renewable energy and the reality of that transition.

This is the case for residents in Milam County, Texas. In 2018, a coal mine and energy plant in Milam closed its doors for good, leaving 450 Texan families jobless. The average median income in Milam has remained mostly stagnant ever since, with only 1.74 percent growth. For context, the average wage growth across the U.S. in 2019 was 3.6 percent. Stagnant wages are typically a sign of a stagnant economy, where job growth is declining and there is a lack of competition among local businesses. Studies have shown that financial distress not only makes it difficult for employees to perform well in their jobs, but also that lower wages make it harder for employers to find good workers.

And Milam is not unique. Across the United States today, over 150,000 individuals and their families depend on employment from coal-based energy production. To them, the shift away from fossil fuels is a threat to their livelihoods and communities. Without real solutions, that growth in renewable energy jobs will do little to help those displaced by federal policies that are turning cities like Milam into ghost towns left behind.

Coal energy production requires between 1.5 to 2 times more workers in total than natural gas and solar plants, and can take up to 5 times more workers than wind farms to generate the same amount electricity. So even if coal-fired power plants had been immediately replaced by renewable energy operations, there would have been a significant number of people left without work. Milam County is one example of many, where closures to coal mines and energy plants have left hard-working Americans feeling abandoned and without hope. By providing job alternatives and utilizing coal workers’ developed skills, this transition to renewable energy could be much smoother.

The Current State of Coal

Coal produces 39 percent of the country’s electricity. West Virginia and Kentucky have close to 40,000 of the 90,000 coal-specific jobs in the United States, and as of 2018, Wyoming produced 40 percent of all coal in the United States, providing over $790 million in state and local revenue (of an estimated $10 billion in total). These states cannot afford a fast and loose transition to renewable energy. Appalachian communities are already struggling and would likely suffer heavy economic losses should the shift to renewable energy production continue without them in mind.

The United States solar industry employs over 200,000 Americans and the employment rate in that industry is growing 12 times faster than the country average. Biden has offered to retrain coal and gas workers for renewable energy work in conjunction with a designated task force, but many barriers exist that may be insurmountable for a simple task force.

If coal employees are unwilling or unable to transition to renewable energy jobs, it is likely that this process will eliminate jobs in the economy without providing a satisfactory alternative. Economists refer to this as creative destruction: the incessant product and process innovation

mechanism by which new production units replace outdated ones. This is not a bad thing, as technological innovation is inevitable and makes us all better off in the long run. After all, when was the last time you ran into a VCR repairman or used a landline phone? It is clear that moving to greener energy production is going to have an environmental benefit that makes this transition worth it. Yet, we need to make sure that individuals in these small, rural communities aren’t diminished in the process.

The False Promise of Renewable Retraining

In an investigation into evidence from the American Recovery Act, researchers at Syracuse University found that green initiatives created more jobs only in pockets of the country that had workers with transferable skill sets. David Popp, one of the authors of the study, made clear that these gains of half a million jobs coincided with loss of employment elsewhere and did not raise the wages of green workers. Another difficulty is the geographical difference between renewable and non-renewable resources. The Environmental and Energy Study Institute (EESI) mapped out each state’s top energy resource. 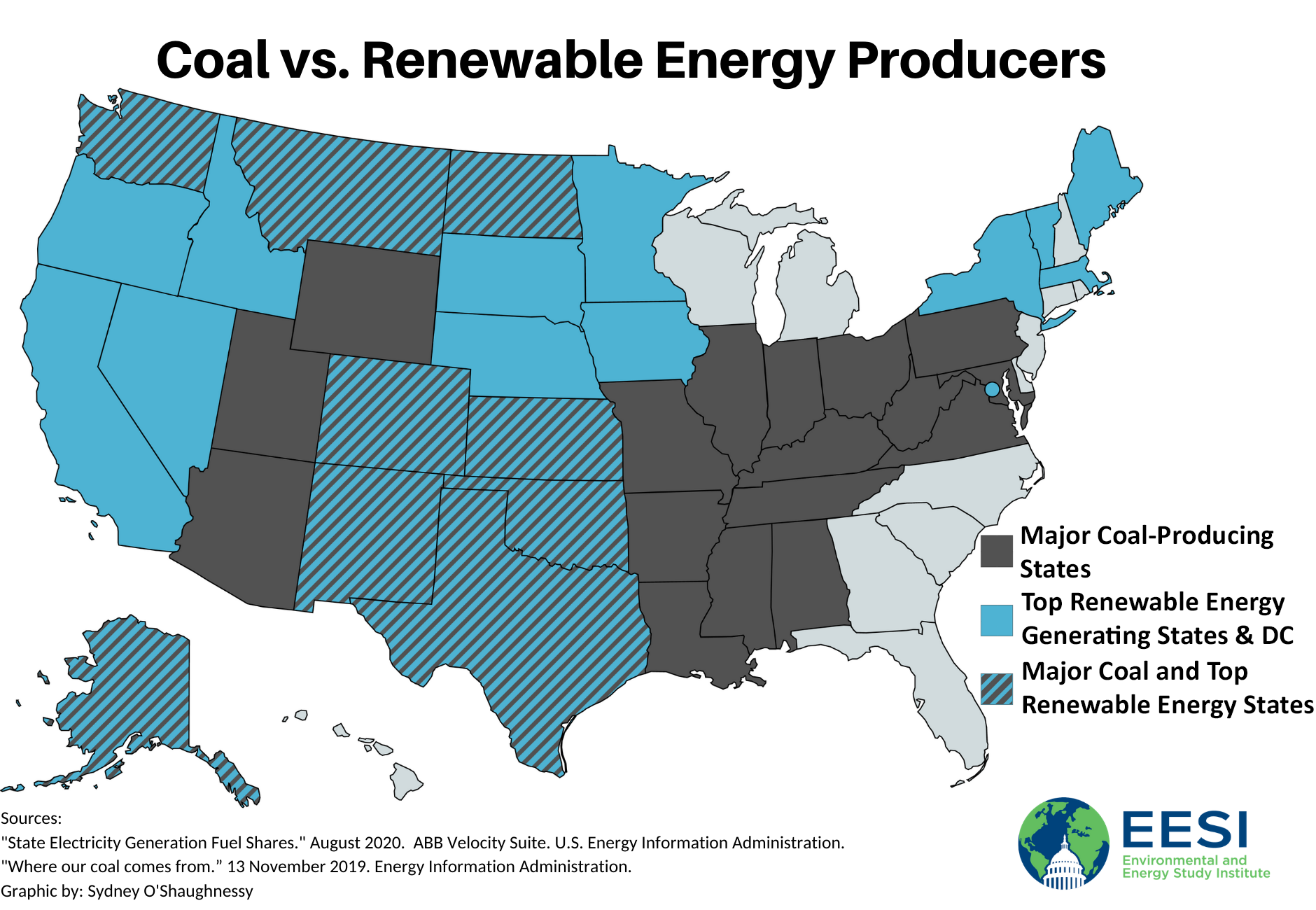 As the map shows, only a few coal-producing states share a border with states that have great opportunities for renewable energy jobs. For the remaining gray states, it will be difficult to convince coal workers to move across the country for a job they are not trained to do. It also confirms that Appalachian communities will suffer in a transition away from coal, since they are some of the largest producers.

According to Brandon Dennison, chief executive of Coalfield Development in West Virginia, “Miners under 35 are excited about the idea of reimagining our identity a little bit, whereas for folks who’ve been in the mines for decades, or are close to retirement, it’s very hard for them to imagine something different.”

With a workforce that averages 45 years of age, it could prove difficult to “unlearn” the skills and knowledge they’ve acquired. Instead, the government needs to examine other possible solutions for keeping these individuals trained and ready for work.

According to recent Brookings Institution research, clean energy jobs can pay up to 25 percent better than the average job in the United States. While this sounds appealing for workers making less than they could in clean energy, coal-workers would actually be taking a sizable deduction in pay. As of 2013, jobs in coal were paying 40 percent better than comparable jobs in clean energy. Most open contract positions for various new renewable energy plants offer non-union pay similar to that of an Amazon warehouse, which is unsettling for fossil fuel union workers accustomed to $100,000 in wages and benefits. On top of a lack of opportunities and abilities for renewable jobs, the pay gap would be steep.

There are some alternatives to consider for solving these obstacles in the coming years. Coal workers in particular have many required skills that would be transferable to other industries that are suffering from labor shortages. For instance, current supply chain issues are in part due to a shortage of nearly 80,000 truck drivers in the United States causing shipping delays, increased manufacturing costs, and soaring prices for consumer goods. Coal workers, who are very familiar with operating heavy machinery and transporting large quantities of coal, could be a good fit for the trucking industry.

At Pivot 2021, an energy conference that took place in June, common themes arose of building on the drilling technology and workforce established by the oil and gas industry to help expand work in geothermal energy. For those who would be willing to move out of rural Appalachia, coal workers could have transferable drilling skills for geothermal positions.

Various government organizations in West Virginia and Virginia discussed reclamation ideas that would provide coal workers opportunities to help with the cleanup of abandoned mines. $11.3 billion from Biden’s infrastructure bill will aid the underfunded Abandoned Mine Land program, which focuses on Appalachian communities and helps ease regional economic pressures. While it won’t be permanent, a paycheck remaining in the pocket of these struggling regions would aid in the transition away from coal.

President Biden’s $1 trillion infrastructure plan passed late on November 5th and includes steps to reclaim abandoned coal sites, which will hopefully provide hundreds if not thousands of jobs for coal-miners. While this is a step in the right direction, transitioning from non-renewables to renewables is going to prove a much more difficult task than politicians make it out to be. We can put Appalachian coal-miners to work in geothermal drilling, mine reclamation projects, truck driving, or other positions that involve heavy machinery. Either way, there are opportunities to help these communities while we transition away from coal and they should be explored.

Advocates for smaller nonrenewable energy communities demand sustainability and consistency for their families, which is challenging to provide through a large-scale transition. By providing employment alternatives to these already struggling communities, we can build back better and provide a smoother transition to green energy while preserving economic opportunity for hundreds of thousands of Americans.